If conservation biology was a hospital, then wildlife conservation in the in the 20th Century was the Emergency Department - crowded with species undergoing the last-resort strategies of captive breeding and intensive management. Like emergency medical procedures, these measures are expensive and take up a lot of effort. And in many cases they are ineffective; not many species make it back from the 'Critically Endangered' list.

It's almost a cliché that we are experiencing the greatest mass extinction since the end of the dinosaurs. By the time the world woke up to the fact of the Biodiversity Crisis, lots of iconic species were in real trouble: tigers, elephants, rhinos, the great whales, and many others. And whilst lots of effort is going to stopping these species from going extinct, not all of them are going to make it. When their numbers drop to a critical level - it depends on the species, but perhaps 100 animals - then the species is almost certainly doomed in the long term. For long term survival, species need a good amount of genetic diversity; this allows them to evolve in response to environment al change, and whilst evolutionary potential may seem like a luxury item for a species on the brink of extinction, diseases and parasites are continually evolving and large animals need to keep up. One of the major issues with bringing animals back from the brink of extinction is that, after you've spent all that money and effort on captive breeding, the species may still go extinct anyway because its numbers dropped so low that it genetic diversity is gone - it has been through the genetic bottleneck.

Unfortunately, 20th Century conservation biology was largely an exercise in reacting to habitat loss and over hunting. Like a cash-strapped Emergency Department, for a lot of the patients it was too late, and even for those that did not die immediately, the prospects are not good. But, whilst the difficulties of endangered species management are not going away any time soon, the emerging conservation challenges for the 21st Century are different. Global ecosystems in the 21st Century will have to cope with two new forces: Climate Change, and Invasive Species. These are both serious issues and are likely to cause a great deal of damage to species all over the world. But they are also just starting to bite; even though we are starting to understand both Climate Change and Invasive Species well enough to predict their likely targets, many of the systems that they can potentially damage are yet to feel their full effects. This leads to an important difference between these new threats and the ones of the last Century, and those differences present some interesting opportunities. 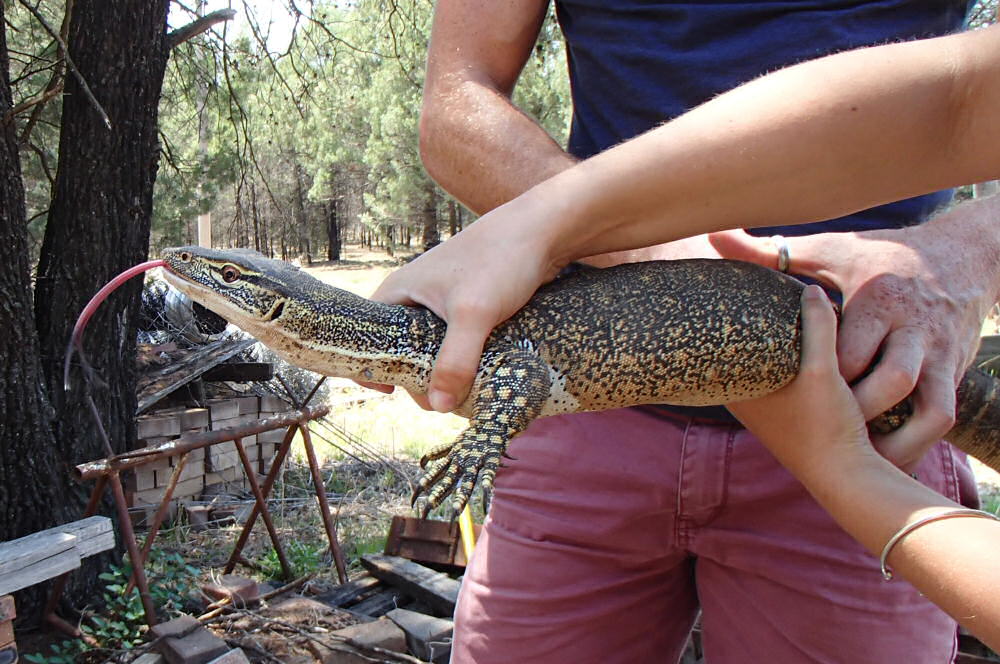 Conservation biologists working with endangered species often dream of having had the opportunity to store each specie's genetic diversity before it went through the bottleneck - a genebank could then act as a failsafe backup and would greatly increase the chances of long term survival. After the crash, it's too late to use genebanking approaches; like the old adage about a stitch in time, being able to bank the genes before the crash is easier, cheaper, and effective. The time to store a species genetic diversity is as soon as we have realised that it is a target of environmental change processes, i.e. before climate change or invasive species have had their effect and the species has gone through the bottleneck. What tissues should be stored? The answer, in many cases, is eggs and sperm; for most species, one or both are potentially collectable without harming the animals involved, contain all of the genetic information required, and come pre-programmed to start creating new individuals. 50 years of agricultural science and reproductive medicine have generated lots of know-how in the area of Assisted Reproductive Technology (ART), and once the techniques are established for each species, the costs are remarkably low. Storage is cheap, space efficient, and, with liquid nitrogen, for as long as you want.

That's the theory, at least. But there has yet to be an example of the 'in advance' use of genebanks to store genetic diversity before a population crash, so the idea is currently untested. The first demonstration of this approach will probably be seen in the Kimberley, where a whole fauna of reptiles and mammals are facing serious population crashes at the hands of that particularly dangerous invasive species, the cane toad. This will be an invasion of global significance; the Kimberley is notable for its pristine wilderness and its amazing levels of reptile diversity, and although cane toads have only just arrived in the East Kimberley, we can be pretty certain of the effect they will have on the native predators. When the toads swept through the Northern Territory 10 years ago, different species of goannas show 75% to 95% reductions, and northern quolls disappeared completely from many locations. We know toads will have a similar effect in the Kimberley, but for now the populations are currently intact, at the same levels they have been for many thousands of years. So now is the perfect time to starting building a bank - the Kimberley Ark. 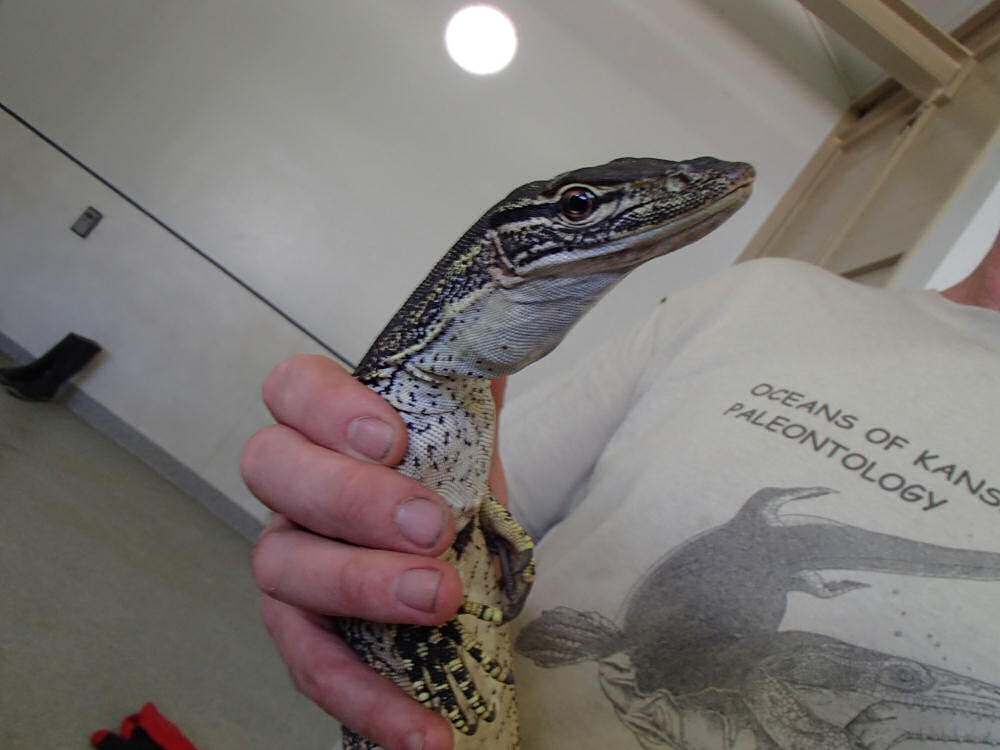 Which leads us to Dubbo, and the Zoo, and the resident population of sand goannas (Varanus gouldii). Dubbo Zoo is famous as Australia's premier 'safari'-style zoo, where large animals can be seen the way they are meant to be seen - in the open savannah (okay, there are fences, but they are a long way away). Whilst the Zoo has a great display of large mammals from Africa, America, and Asia, it doesn't have too many Australian reptiles... apart, that, is, from all of the resident reptiles who think the zoo is a great place to live. The Zoo is at the forefront of conservation biology, with a globally famous Black Rhino program, and consequently many of its staff have expertise in using ART as part of intensive management efforts for critically endangered species. Which makes it the perfect partner for Project Kimberley to help start developing the technology required for the Kimberley Ark.

Although the sand goannas around Dubbo are not, as far as we know, under any kind of threat, they are close relatives of the goannas that are facing toad impact in the Kimberley. And even though the theory of genebanking using ART is pretty straightforward, in practice the steps involved with collecting and storing sperm and eggs vary between species. Most work in this area has been done on mammals, and hardly anything is known about how to apply ART to reptiles. And no-one has tried anything like this to goannas. So, before we start collecting sperm (we'll concentrate on sperm because lizard eggs are too large to freeze easily) from soon-to-be-rare goannas out in the remote bush, we need to hone the techniques on a more convenient population of goannas. Which is why last week we were strolling around Dubbo Zoo, in the beautiful Central Western NSW bush behind the zoo enclosures, catching sand goannas. 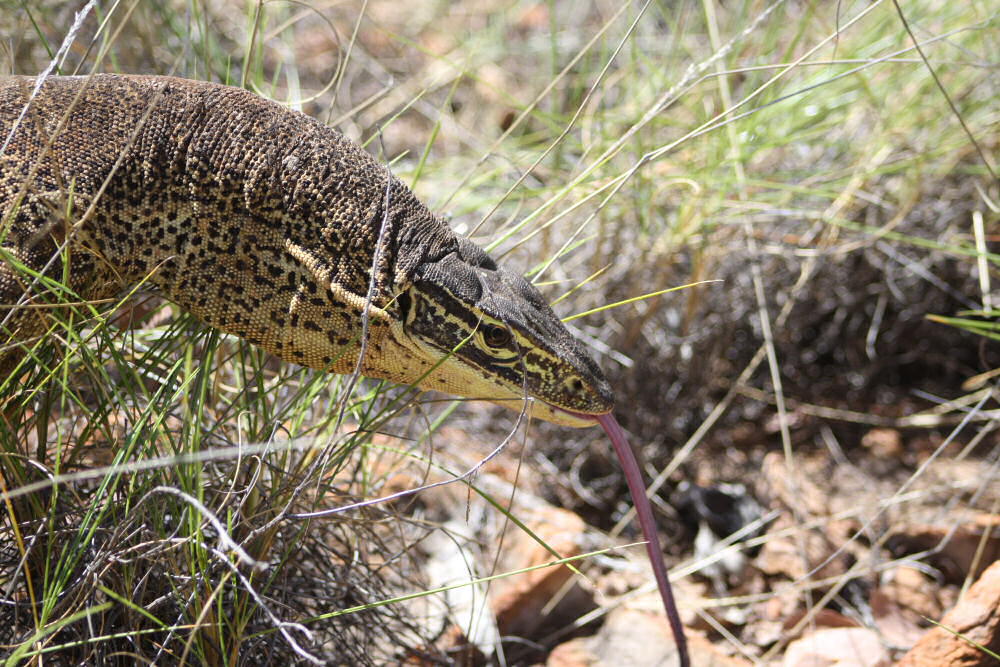 Life for a sand goanna at Dubbo Zoo seems to be pretty good, from what we can tell. Sand goannas, also known as Gould's monitors, are the most widespread of Australia's 30 or so species of goanna. They are fast and are often wary; of the 9 species of goanna we regularly encounter in the Kimberley, they can be the hardest to catch. But the animals at Dubbo Zoo have got very used to people and are evidently not often troubled; we walked right up to the three animals that we caught in one morning, including a monster 1 kg male living the high life at the tip, and another lizard who was cleaning up after the lions' feeding time. Once bagged, it was straight to the Zoo's vet labs and under the watchful eye of the head veterinarian. After a couple of hours, we'd found a procedure for sperm collection that worked, borrowing from some recent work by colleagues in the US who were working on captive crocodile monitors. By the time we confirmed the sperm were motile and present in good numbers, the animals were back running around in the parts of the zoo that they call home.

If we can use trials like this to establish robust techniques for the safe collection of sperm from wild goannas, with minimal fuss or interference to the goannas involved, then we have taken an important first step towards making the Kimberley Ark a reality. The next step will be to develop procedures for freezing down the sperm so that it remains viable, even after long term storage at -200°C. Once these techniques are fined-tuned, they are cheap to run; the Kimberley Ark genebank can then be applied to any goanna at risk of cane toad impact that we can catch in the field, at a fraction of the cost and with much more effect that can be done after species have crashed and have been through the genetic bottleneck. If conservation biology is a hospital, than this approach is the vaccination outclinic - an inoculation using clever but cheap biotechnology, insuring against the loss of genetic diversity for species that we know are going to face a tough time in the next few years, and with luck giving us a chance to keep the unique Kimberley ecosystem from losing it's beautiful reptilian predators once the toads move in.